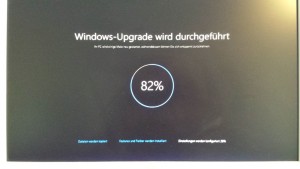 I just upgraded to Windows 10 using the download tool. Download took around 4 minutes and installation around 1 hour. I have an SSD and deactivated my AntiVir solution to get the quickest installation possible before leaving for work and it looked promising in the beginning having completed phases 1 and 2 of the installation after 20 minutes but then the configuration phase took forever being seemingly stuck on 16% and 28%. Bummer. Had to leave for work and when I came back it had finished but it started in a temporary profile, no HD access, graphics card not detected, only one monitor. Bummer 2. Restarted and logged in again, now it worked, after some seconds second monitor was detected and voila! Back to workable mode 🙂

Now that it’s done it looks quite nice though, no real complains so far, not sure if I like the flat style of icons and windows, will dig deeper into all new features as time passes by. 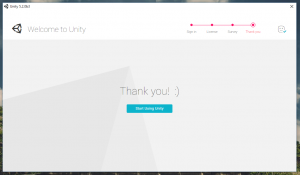 Then started up Unity. License not valid anymore, as announced in the forum. Ok. So click on reactivate which does an automatic return. Error. Bummer 3. Cannot copy license file. Close Unity and start again with administrator permissions. This time it works and activation also does.

So far everything works as before! I’ll check in more detail later. Switching from Windows 7 to Windows 8 was a big improvement back then due to the enhanced memory management of Windows 8 (the much quicker boot was also nice). It resulted in much less paging going on on the hard drive and therefore much faster operations in video editing software and memory hungry applications. I’ll try to observe the next days if similar effects happen in Windows 10 and Unity, especially lightmap baking. I never had the case though so far that Unity started paging so that might not yield too many objective results.