Three basic boundary conditions were there:

The last one was not in the rules but by me since I do own a DK2 and there was a VR track.

Earlier this year I had an idea for a kind of endless-runner game: you are standing in front of a door and some guy with an axe is trying to come through and you have to keep it shut by putting all kinds of stuff onto it. More like an endless-builder game one could say. There would be different materials and you get special weapons etc.

As it naturally involves your hands I quickly came back to the idea but had to simplify it. And also make it more plausible. And what is more plausible than a guy hunting you with an axe? Of course, zombies. So my idea was to have zombies stream from all over the place and you have to keep them out. You would find special tools in your room to do crazy things with. And there would be all kinds of different zombies, some coming through openings, others suddenly breaking through the floor etc. Shock all over the place.

Now, when designing a game one has three dimensions to think about:

You can only have two of these. Since time was constrained I decided for quality and now had to reduce the feature scope to get down to a game that is still fun to play but does not keep me busy for a year. I started to draw a professional picture of how I envision the game: 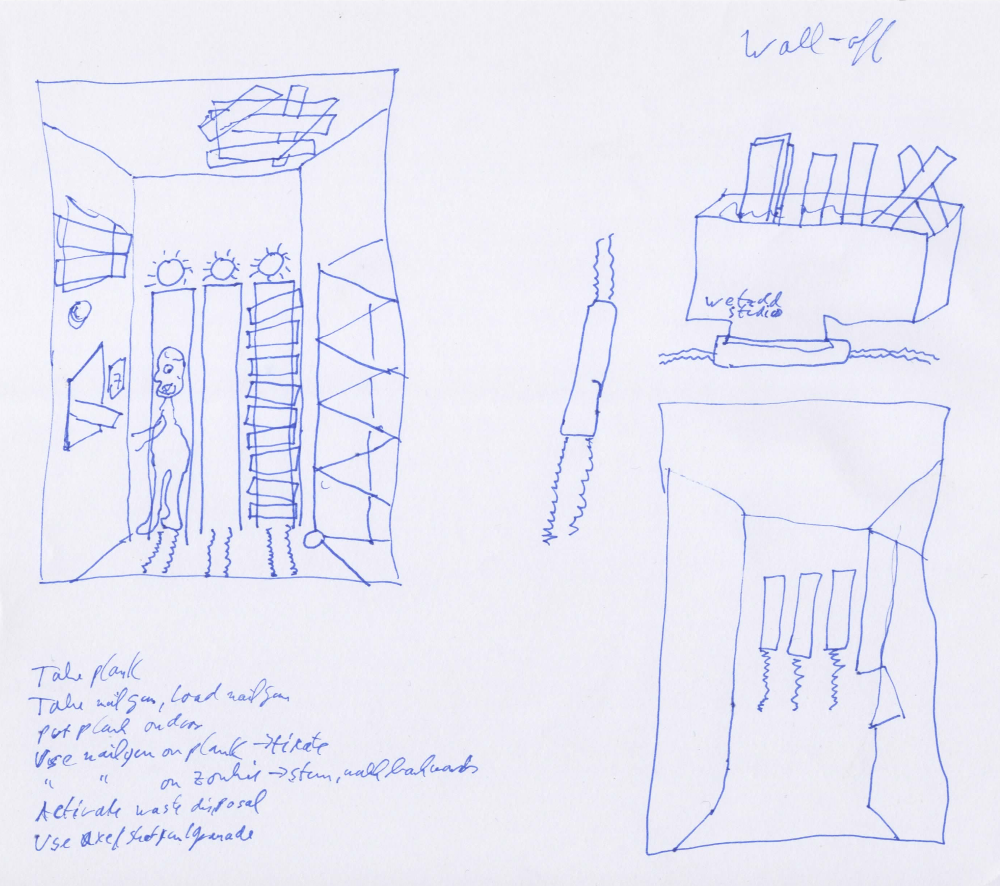 What can we see? For one, the player is standing in a room. There are three openings to the front, of them barricaded, one more on the ceiling and one to the upper left. On the right-hand side is a tool shelf and on the left a wood dispenser with a small panel right to it. There are also alarm lights above the doors. On the floor are tracks that used to carry wood somewhere. So far so vague.

And then were Zombies

Now that the room is ready we to fight. The door behind the player locked so he is trapped. The basic idea is that there is a steady stream of zombies and the player has to keep them away as long as he can until he inevitably gets eaten.

The thing is, how in the world do you fight zombies? One basic mechanic is blocking the door with wooden panels. The zombies will then try to destroy them and you have to hurry to not let them through. While that is great fun for a while there are two problems:

That cried for some sort of additional “weapon” to be used to eliminate them.

One idea I had was that since I am in some sort of mine maybe there is a way to flush material to a lower level, like a trapdoor. Problem: why not leave it open and then zombies would be kept away for good. So, rather illogical.

In a saw mill, there must also be a saw blade. Could that be used? Maybe, but probably only once, how many saws will there be one can throw. So also rather impractical.

A gun! You just shoot the damn zombies. Works. But where is it coming from and it’s kind of dull and you run our of ammunition at some point. But maybe the gun can be altered a bit and become a nail gun to attach the wooden planks. That could work. And one would have to recharge it every now and then. Would fit into the wood shop metaphor. Nice. 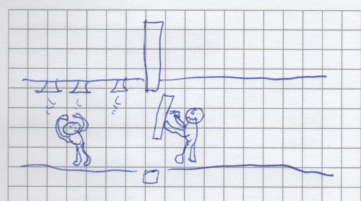 Some sort of heat or light from the ceiling. Hm. You need lights anyway in the mine. We need a reason why the room is not full of zombies in the beginning. So maybe, if the lights are on in the beginning and then suddenly fail causing the zombies to appear and every now and then they come back causing them to die… we are on to something here. Of course it would not hold up to zombie medical standards but that’s it: light kills zombies. Decision made.