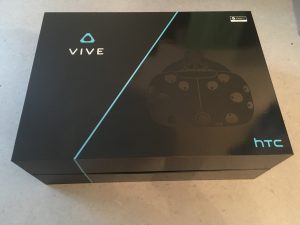 It has finally arrived and all of us who have tried it so far have to say: VR blown away! I owned a DK2 before so VR was nothing new and I had, after some inner struggle with the price, pre-ordered the CV1. When the Vive reviews started coming in and the shipping dates for the CV1 moved into late June I finally canceled it and switched. What a good decision!

From what I personally read there seems to be a majority that acknowledges the quality increase between DK2 and CV1 and how much better the handling is. Whenever one compares it though to the room scale and controller experience you get with the Vive, it’s just a completely different league though. It is just so much better and you walk in awe through your room / virtual Job Simulator cubicle / lab and feel amazed over and over again.

With this new toy at hand I decided to pause the development of The Eternals for a certain period and try to come up with something exciting in VR as that really feels so much more rewarding (and potentially also is, looking at the very few titles out at the market and the high prices charged). I’ll also try to port Adit Rush to the Vive as it might fit really nicely to the room scale interaction paradigm.

Installation-wise this was really easy to setup. One sensor on a high shelf and one on a tripod. I have 1.6 x 3.5m and that allows for quite some walking. Nice!