So I had to learn some hard lessons with Rush ‘n’ Roll. I developed on the PC and used nice shadows, forward rendering and HD textures and all was nice and cosy. Of course I did lots of profiling, optimizations and object pooling to get it to run nicely on my Samsung S4 and S2 as well. And it did.

Then I asked a friend to try it out. The first thing he asked me if it’s normal that the game needs around 2 minutes to start. Whahaat? Then after it starts it kind of has 2 frames per second. Uuuuuh. Not good. Not good at all. He showed me and it was quite embarrassing. 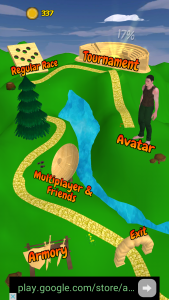 I don’t have this device type so far to figure it out but the main difference is memory and the graphics unit. So today I pushed out an update that doubles the frame rate on the S4 while reducing memory to a fourth using smaller resolution textures, switching to vertex lighting, removing depth of field and shadows. The vertex lighting is not actually a problem I realized, only the terrain looks crappy now. Might export that to a mesh later.

The game is still fun of course (and it also profits from all the Unity bug fixes that came out in the meantime which seem to solve the “crash at exit” bug).

The ugliest part still is the start up time and I have no clue where it goes to. I have a thread about that on Unity forums but no good answer so far. They should definitely add that!